You're waiting with bated breath to hear reports of Crabtot's third birthday party this past weekend. But I'm still recovering and hence can't quite bring myself to post yet. Maybe by the time she turns four. Actually, in truth it all went rather well. And as you know, I don't like to post about the rare good times one has a parent. It just 'aint good reading!

However, I can and must post about what happened to the Dollar store prize from the now-famous Dollar store contest we held here at Crabmommy. Remember the prize? It was won by Char who submitted the marvelous power tie that cinched her spot at #1. It was patterned in the manner of the American flag and had musical powers too.

Char won a most attractive sculpture that I found at my local DS (the one that sells crucifixion stickers and dried fruit labeled "mango-flavored pineapple"). The sculpture had the following attributes:

1. it was shaped rather like a piggy bank but had no coin slot
2. it depicted a smiling flower sporting either a bar of soap or what might be a sign saying "H20." Hard to tell. That's the beauty of it.
3. It was very, very ugly.
4. Note the use of the past tense. It is explained below:

This is no lie: I went to wrap the sculpture last week to send it to Char and dropped it. By accident. I repeat: I am not lying to you. It broke. So I immediately wrote to Char and told her that, perhaps, she was in luck, for her prize in fact broke before it ever reached her mantelpiece. Luckily I photographed it before it died. So Char, if you still want it, I can likely find a replacement.

Here's the original, at long last! People, you have been clamoring for it. Feast your eyes: 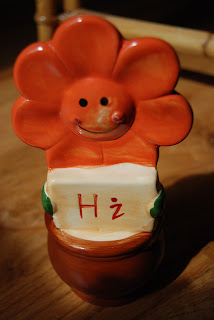 The question of the day: is that a bar of soap, or a sign begging for water?

Char, I am truly sorry I destroyed this. If you want, I can find you another—that is, if they haven't already been bought up by Crabtown's discerning residents. Or as an alternative first prize, you can win the right to NOT have one of these mailed to you by Crabmommy.

Haiku for a Weird Flowerpot

Sculpture, R.I.P.
We loved you so and did not
Mean to let you go

And this concludes our Dollar store-related posts. It was fun. But I think we're all a little relieved that it is finished.

Oh, and today at the bloglet, I'm mocking Dr. Sears.

Posted by Crabmommy at 8:57 AM

I know, a normal "i" is not a "z" with a dot over the top, but in Dollar Store land that's just what they do. Go figure.

A! You are a genius! Oh my gawd how did you ever decipher that? But now that you have, I see it, I see it! I bet you scored dangerously high on those IQ tests where they showed you a piece of paper depicting a nose but then you were also meant to see a vase at the same time. I mean, that's bloody easy compared with flowerpot hieroglyphics. I am astonished at your cleverness and grateful to have it here on Cmommy. Mystery solved!...or so we think...

So, you're seriously DONE with talking about the Dollar Store?

I'm afraid this parched pansy (or is it a peony?) has seen better days. What's the deal with the birthmark on her face?

I regretfully waive my right to this charming prize.

P.S. The tie also LIT UP, people (when it wasn't too busy whistling patriotic tunes)!

the beauty of the dollar store masterpieces is that they never fail to renew my faith in my own possibilities... it obviously doesn't have to be cute, well made, or even serve a purpose to sell!

Yes - I always did score high on those tests, but only in the category of useless random pattern recognition. It serves me well in my chosen profession of...aw, crap! It's of no use at all. For a second I thought I was on to some kind of savant thing, but I don't think it counts if the savant skill is limited to sussing out the meaning of Dollar Store flower sculptures. Still just an idiot after all. Sigh.

Char, I understand, But my heart is heavy.a of a&a, you continue to prove to me that I am in esteemed company. And don't knock your pattern recognition skills. Anyone who can decipher that flowerpot is bound for big things. One day we will all be referring to this example and saying to the press, "OBviously those of us who enncountered A in the early days knew he was someone to watch..."

A, I am watching you. You flowerpot hieroglyphics genius, you!

My heart is heavy too, Crabmommy! But I just don't think there can be a replacement for such a lovely sculpture. I mean ... would it the replacement didn't have the giant mole on its right cheek? It just wouldn't be the same.