Flip flops and...Zen and the Art of Corey Feldman

It's always heartening to see courageous rebels in troubled countries, such as Myanmar, getting together with the authorities to hash things out. And I mean this seriously.

But I like it even more when they hash things out in flip-flops as in this pic from the NY Times showing an opposition leader and a Burmese official in talks: 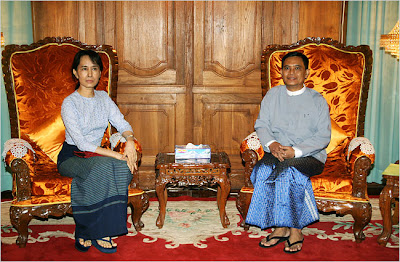 Surely they can reach some agreement. I mean, they're both wearing 'flops!

In a completely unrelated point I was moved to read that Corey Feldman, that pitiful Lost Boy, has a toddler called Zen. Which is surely asking for trouble, and is also kind of confusing: "Zen, calm down! Zen, get your finger out of your nose!" It will be a titch ironic if young Zenny ends up on Ritalin.

Posted by Crabmommy at 8:06 PM

HAHAH!!!!! You are so right! And perhaps that wonderful couple didn't see the drama's that occurred from flipflops purchased at Walmart..hope they didn't get theirs there!
Always,
Crusty~

I hate to admit it but my cousin has a child of the same name - only it's spelt "Zhen". If there's anything I hate more than weird names that arn't really names, it's when names are spelt weirdly. God knows what she was thinking.

Corey Feldman has a kid? When did this happen?