As the Crabhubby nears his final hours as an employed architect, I beseech you to think of him and those like him as you pass out your own remaining coppers. Here follows a few words from Crabhub coworker Jege, good friend and frequent visitor here at Crabmommy: 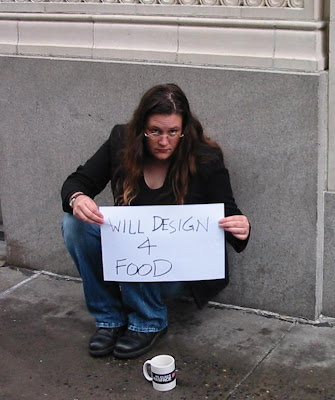 And you and yours? How's everyone faring in their chosen careers these days? Please, no happy "we're hanging in there" people or your happy comments will be removed by my site administrator. Complaints only.

Posted by Crabmommy at 9:07 AM 18 comments Links to this post

Seattle is swell. Crabhub and I popped up from Portland by train for a few days and our visit coincided with that of a major celebrity: the sun. Yes, the sun deigned to shine upon us for at least a quarter of each day in Seattle. (Seattle-ites, don't get uppity about my sun-swipe: I live in Portland, so I'm clearly not a big sun-worshipper. We can either now argue over which has more gray or simply agree that neither is exactly the shiniest place on earth. Which is all FINE. We know it's fine. Keeps everyone else in Cali, right? But let's not do a whole Seattle-really-is-very-sunny thing right now in the comments...k?)

Ahem. Lost my thread there. Ah, right. Seattle! It's really a quite lovely city to visit. I like the way they do things over there: for example the toilet stalls all seem to have very low doors so you can select your preferred toilet bowl without having to go into the stall to survey it.

Seattle has many splendid things about it. The Central Downtown Library, designed by famed architect Rem Koohaas, is not one of them. Seriously, for all three architecty types who happen to read this blog, I must just let you know that I don't doubt that the otherwise highly attractive and intelligent city of Seattle paid an extraordinary amount of money for an architectural embarrassment to define its skyline. No that the outside of the building is so awful. It's the inside: so completely awful it is, full of stupid Deconstructivist high-concept-theory-crap angles that...fulfill what purpose, exactly? To make you feel ill? Claustrophobic. Frightened. Why? Is this a holocaust memorial? No. It is a library. Or at least I thought it was until I went to the restroom: up one of those scary steep highlighter-pen-colored escalators and emerged in a creepy tunnel bathed deep abortion-red, pulsing with the shadows of homeless people. No, I am not against homeless people. I am almost sure I will soon be one of them. But I think a person has the right to go to the restroom in a public library without physically brushing up against transient humanity-at-large. Impossible not to as one fumbles through a long dark clubby-red corridor. Wait! I think I get it now--the architect's vision is to bring uptight people into contact with downtown transience. Mission accomplished, Mr. Koolhaas!

Okay, archi-rant over. Sorry, I'm married to an architect. My marital lingo nowadays went from the early-days sweet nothings to chitchat involving words like "spandrel" and "cornice." Sigh. I guess everything must evolve. But at least we are still here, together, and occasionally dining like grownups in such places as Seattle's Boat Street Kitchen. What a nugget of a restaurant! Such crabcakes!! Go there.

I hope y'all had a good Mother's Day. My child cried on the phone to me during mine, telling me she missed me. My heart broke briefly; it's true. But I chose to take the episode as a straight-up example of how long overdue Crabkid's Special Time with Grandma is and how right we were to leave. Time with grandparents alone is important for all children and their parents and grandparents--or at least that's my ideal. And I feel lucky that my mom-in-law was so willing to fly in from Utah to provide us all with what we needed.

Plus Crabkid was so cuddly on return. It's so delicious to go away, miss your child, and then capture them for a smothering love festival on return.

You? How goes it?

Posted by Crabmommy at 9:51 AM 5 comments Links to this post

If you've ever asked yourself if you're a bad mother or second-guessed your maternal instincts even slightly, or if you get a tiny frisson of pleasure from discussing the bad judgments /lazy-assed performance/ not-so-hot mothering skills of the moms in your orbit, then Ayelet Waldman's new memoir is for you. Aren't you glad I didn't use the word "momoir"? So am I.

Ayelet's name has crossed my lips before on this blog here and here. She's the author of the Mommy Track mysteries, of Love and Other Impossible Pursuits, of Daughter's Keeper, has four children, and still manages to look tremendously adorable. And so I deeply dislike admire her greatly. In fact I really do. She is brave and compelling and I am sure every one of you out there will agree that whether you subscribe to all Ayelet's ideas of familial love hierarchy or not, we mothers are all served well by those among us who are willing to engage the tricky parts of motherhood with bluntness and intelligence, instead of clogging the world of mommy media with yet more safe, peppy, rah-rah motherhood claptrap.

Ayelet's memoir Bad Mother: A Chronicle of Maternal Crimes, Minor Calamities, and Occasional Moments of Grace is just out. See her read from it here:

For those of you in California, Ayelet is doing readings all around the state the next couple of months. Check here for a sched.

Also just out is True Mom Confessions: Real Moms Get Real. Culled from her fabulous website, True Mom Confessions, where moms come to anonymously rant and confess crimes real or imagined, author Romi Lassally reminds us that we all say/feel/think shocking unmommy-ish, unwifely sentiments all the time. All of us. None of us are perfect and trying to be can make you even worse and witchier and crazier and guiltier and more miserable and therefore less available to our families. So cut yourself some slack, y'allz! And while you're at it, cut that other mom some too. That bad mom you were just talking about. The one brought Kool Aid to the picnic. (And can you believe she lets her kids watch that show? I agree, it really is inappropriate...)

Off to Seattle to be childless on Mother's day, I am. What a bad mommy!

Posted by Crabmommy at 9:15 AM 3 comments Links to this post

As Mom's Day rolls around again I think back to last year's. It was just perfect.I got exactly what I wanted: a day to my crabby self, prowling the streets of my city toute seule.

I've never been a big one for all that MD gimmickry but now that I'm a crabmommy I'll take all the appreciation and worship I can get. This year promises to be a goodie since my mother-in-law is graciously flying in to watch Crabkid for three days while Crabhubby and I take a train to Seattle. I have never been to Seattle but it just a few hours from Crabcity, that being Portland, OR. I am most excited to travel by train; trains are so much more dignified than cars. Although you can't argue as much in them so that is definitely a con.

Anyhoo. In anticipation of MoDay, I have guest-posted a series of my ideal presents over at Etsy. Because it is not enough to be childless and carefree for a few days of Seattle. It is not enough to have my mother-in-law go out of her way to ensure this break for the Crabparents. I want more. Always.

Do stop by and help these great vendors of vintage and handmade fabulosity. Its just astonishing how gorgeous Etsy's loot continually proves to be. Mothers, treat yourself or your mom or grandma to a dear little pair of vintage earrings or a cactus in a vintage lusterware pot or whatever your mommy soul desires. Or send your spouses and boyfriends and polyamorous partners over to the site in support of you, O wondrous selfless mommy-creature, you!

The only sucky thing about guesting at Etsy is that I get all bitter and annoyed that I cannot have it all, every last bit of it. My face gets all pinchy and sour as I pick out the products and then it turns pink with covetousness and then green with envy as I picture those who can actually buy any trinket they wish off Etsy, any day of the week. Then my face turns purple with rage. Just sharing!

Enjoy, my dear mom-friends. And do tell me, what do you want most of all for Mother's Day? Please don't answer "hugs and kisses." Those kinds of answers are not welcome on this blog and will be removed by my site administrator.

Posted by Crabmommy at 9:12 AM 23 comments Links to this post