Behind Every Good Man is a Great Power Tie 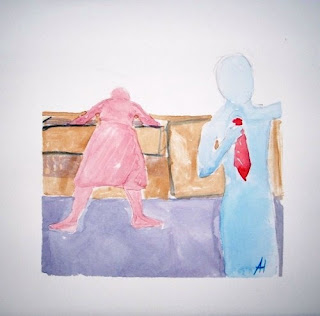 AUCTION HAS ENDED. The winner is KAREN. (Karen, I will be in touch.) This one's for Carol.
"Behind Every Good Man is a Great Power Tie" is the title of this hilarious watercolor print, graciously donated by my good friend Ashley from her etsylicious store. This is a 5x6 inch watercolor in a black 11x14 frame. The piece really cracks me up! The artist says it's her commentary on being a Stay At Home Mother/Navy wife. It's been a fair while since Crabmommy dug deeply into the interpretation of fine art, but I'm going to give it a go. The irony called up by the title is neatly illustrated by the man in his power tie, dominating the foreground, while in the background, his hunched-over wife sorts through the dresser drawers, showing who's really behind the man's success. The punch line here obviously derives from the twist on the phrase "Behind every good/great man there's a good/great woman," itself a commentary on the power dynamics inherent in male-female partnerships. Evidently the wife here is really the powerhouse of the duo: the guy can't even get dressed without his wife's help, and probably she chose the dang 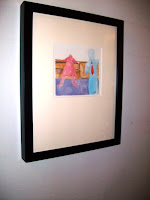 tie too...that said, she looks pretty beaten down by the sheer drudgery of it all, poor girl, and could use a large martini or an affair with Javier Bardem. So much for power! And then there is the tie itself: that bright red focal point of the picture. It spells out something we all know to be true in various forms: that appearances are all-powerful, though they may also be deceiving. Whooo...Crabmommy goes deep! And maybe the most salient and thought-provoking observation I can make is that I think the artist has an IKEA Malm series bureau like me! Okay, so my prattle may be so much hoo-ha, but the fact is this piece makes me talk and think a lot, and good art should. And now my head hurts. And yours does too.

I'd like to add that Ashley is another of my chums from Offsprung, the website for parents who are not completely boring. Thanks Offsprungers who have so kindly donated to this auction.

*Generously donated by Ashley of babywalls.

Posted by Crabmommy at 9:23 AM

I'm not sure how it will cross the boarder into Canada but I'm in for $15.

Shouldn't that be: in front of every good man is a great power tie... that his wife bought for him.

$30
My husband would appreciate this!
:)