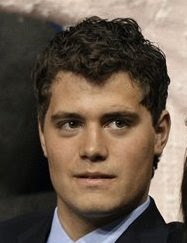 I know the whole world has been telling you this, but it never hurts to hear it again: you really are very cute, which is a good thing for the baby of Bristol Palin since she is herself very cute as is her mother, and all that cuteness will help your kid out when you guys can't deliver in the more cerebral departments.

You also do very cute things. Like when you lost the "promise ring" that, in a twist on tradition, your budding feminist Bristol gave to you, and you decided instead of a ring you'd just tattoo Bristol's name on your ring finger. I know a lot of people who will think that is cute. People like Pamela Anderson and Tommy Lee and a bunch of others who dig that whole tattoo-instead-of-ring thing. I myself don't find that very cute, personally, but I can understand how it might be deemed as cute by others and how it will definitely seem refreshingly cute if your mother-in-law makes it to the White House. The tattoo, paired with your dropping out of school to become a rigger or a jigger or whatever it is they call oil people, can be cast in quite a cute light: it's that whole down-home Wasilla in Washington thing.

I really did enjoy reading more about you today over at ABC News. Like, this part:

The soft-spoken teenager discussed his relationship with Palin and how life has changed with fatherhood fast approaching. He agreed to talk despite the presidential campaign's advice in the days following Gov. Sarah Palin's nomination to avoid the media.[...] "They're not telling me anything right now," Johnston said as he checked his Blackberry. "It's pretty chill."

I just love how you check your Blackberry! Levi Johnston is a busy man! Seriously cute. And I love this part too:

Johnston hinted he's expecting a boy, but he declined to discuss baby names.

"I'm looking forward to having him," he said. "I'm going to take him hunting and fishing. He'll be everywhere with me."

I love how you didn't give the gender away. Very artful of you, my cute young friend!

Another reason I probably find you cute is that you remind me of an ex-boyfriend of mine who was terribly cute. I mean, really devastatingly handsome. You can't maybe tell in this mug shot I'm about to show you but trust me, handsome as all get-out, like you, Levi. 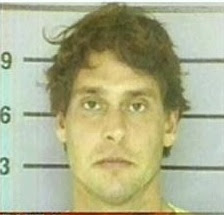 Unlike you he actually came from a top-notch blue-bloody family but he went a bit bananas. I remember it as the big tragedy of my early 20s, where I met this lovely cute person whom I thought I could have babies with and then one day he just stopped coming out of his bedroom. His roommate called me and told me he had locked himself into his room with pounds of pot, and was maniacally drawing pictures of horses, which he would slide under the door. The horses were sort of a bad sign I guess, but I was in my 20s so I ignored the sudden equine obsession and continued to throw myself at him in a fog of adoration. Then he went more nutso and druggy. Luckily he was very rich and managed to purchase his own crack den down south. Sadly it all came to an end when he was had up on rape charges. And I know it's bad and all to say but, in spite of the bad lighting in that mug shot (which I Googled) and the drugs that have ravaged him since we were young, I still think my ex looks a little bit cute so...you know, maybe the alleged victim sort of got lucky? I'm sure your mom-in-law would agree with that one!

Anyhoo, I suppose I'm getting a bit off-topic here, Levi, not that you would know about that since you probably didn't get to the whole 5-paragraph essay bit in school. I guess I just wanted you to know that, like a lot of people, I think you are dang cute! And I sincerely wish for your baby that you and Bristol will really resist tradition when it comes to that baby name and just go with something like Jane or William. So that's my advice. And, you know, stay away from the drugs! Because when you're a rigger or a jigger or whatever, there can be temptations! Of the meth-y sort! So just, you know, just say no! If you can't keep your pants on, at least keep your nose clean.

I guess that about sums it up for Crabmommy advice, Levi. All best to you, your bride, and the fruit of your loins...How cute will that baby be? Forget it! I almost can't stand to imagine the level of super-cuteness about to debut. The future for all of us in America may be uncertain, but experts are predicting a landslide of cuteness in that scrumpulicious new Wasillian you've been working on. So, high five on that!

You know, when I read that little news-er-tainment snippet this morning I was at a loss for a comment. So thank you, Crabmommy, for doing the hard work for me.

The scariest thing for me about Mr. Elk-shooting-antler-strewing Heartthrob is that even at 18 he looks so darn presidential! Some day, he can follow in the footsteps of his MIL...

And since he's named after a pair of denims (how Alaskan Frontier is THAT?) he can't go wrong!

Second, I really hope Levi can say no to drugs since he and Bristol obviously weren't able to say no to sex.

Frogs in my formula said...

It must be the day for blog letters b/c I just wrote one to NPR. Found you from random. Very funny post! He IS cute and I do like acorns.

That would be 'RigPig' CM.

Your ex is kinda cute. He kind of looks like Matthew McConaughey... If he were just tossed in the slammer...

remarkably unremarkable: my rapist ex was really impossibly ridiculously, sadistically good-looking with an absurdly perfect physique. I am being totally objective here (never mind that I was so hysterical when he went crazy that I had to go to a shrink for the first time in my tender young life). It really was a waste. And he could play the piano beautifully, was an actually talented performer and born with a silver spoon --make that a golden spoon--in the mouth. Amazing how people who have it all can cock it all up.

I'm still dealing with the idea of Levi dropping out of school. Without a decent education, can he ever rise in the business? That is, unless his MIL fires someone she doesn't like and promotes him?

But Daisy, he's got such a gosh darned good lookin' face! Who needs a high school education with looks like that?! And of course Palin will promote him, she's good for one count of abuse of power, why not make it two? Maybe she'll teach him to wink like her...

as usual you hit the nail on the head!!!! brilliant!