After a delightful winter break of resting on a tiny deck chair in the Bahamian sunshine, my blogging finger has returned bronzed, buffed, and ready to get back to business here at Crabmommy, reporting on significant financial, cultural, emotional, maternal, and trivial events as I see them.

I should qualify that I refer to my "blogging finger" because I am still one of those people who can't type properly and who types with my right index finger dominating the keyboard. Regretfully, when I was at high school, typing was a skill taught only to those who were truly tanking academically. Amazing to think the one practical ability that would have helped me out in my chosen profession of writing is now lost to me forever. And I say "forever" because I am super-fast with my blogging finger but feel that my spastic bashing with blog finger is now such a part of me that I could never unlearn it in favor of dignified ten-finger typing.

Anyhoo. Hoping you and yours had a swell time at Christmas, and were successful at attempting to mask whatever feelings of envy, frustration, bitterness, martyrdom, and futility accompany most family gatherings.

Speaking of the hols and family, one has to wonder how Hanukkah went down for the Madoffs this year. Which leads me to my blog title: seriously, does Bernie Madoff not have the most awesome coats and jackets (in that Upper East Side patrician genre)? Even the black tie he dons for that somber "mea culpa" look is indisputably chic! Check it out: 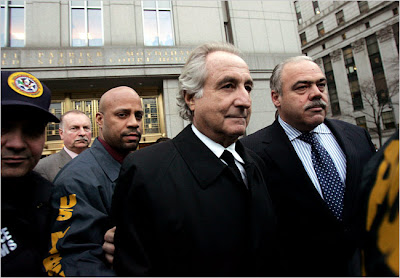 I am truly obsessed with Bernz Madoff. He's being so naughty this week! Did you hear he sent fancy mittens to friends and family, in addition to some jewelry whose value is being hotly debated? His lawyer said that sending mittens doesn't constitute a violation of Madoff's bail agreement. Indeed, the mittens are free to go to Montauk without any sort of tracking device whatsoever.

Okay, so I'm not making sense, but really, nothing about any of this makes sense, eh? For my money, I think it's wonderfully entertaining to read about. I am fascinated picturing Bernard, all handsome and silvery, sitting on a plush chair in Park Avenue eating kosher meals in frozen silence with his wife, Ruth, staring in defeat at the embers of a dying fire in the handsome Beaux Arts fireplace...or maybe they scream at each other and Ruth hurls bowls of her famous matzoh-ball soup at the wall (Ruth is a celebrated chef, FYI). Another scenario: maybe she really did know what beloved Bernie was up to all along and so for fear of being bugged they communicate in sign language or write furious notes to one another on miniature blackboards (like the one that Anthony Hopkins had when he played that ridiculous old man in Legends of the Fall) —communications regarding secret bank accounts and buried baubles...

Oh to be a fly on Madoff's wall! And to return to you able to repeat the dialogue between the Madoffs!

I will return to you soon, my friends, with if not a word-by-word recording of Madoff convos, then at least more GOOP reportage. Because I have been receiving wonderful newsletters and recipes from Gwyneth over the holidays and I have learned much that both Gwyneth and I wish to share with you. White sugar makes her "cringe," for example, and so she sweetens everything with something called agave syrup, which I imagine is very costly but I dunno...maybe you can substitute your bread, milk, meat, and coffee budget for agave syrup. It's definitely better for you than that crap you're eating now! Gwynnie also wants you to know that she calls soy sauce "shoyu" but she knows you don't know what that means, you pedestrian pleb, so she helpfully places an English translation into her shoyu-containing recipes so that they look like so:

Oh, and this week at the bloglet: book recs. Please come and tell us what kiddo books you love and also, which ones you do not love. It's an equal-opportunity reccing and dissing forum over there so feel free to tell us which books drive you bonkers but you're forced to read them by your tots...

Posted by Crabmommy at 9:39 AM

If you live in a) Japan or b) Hawaii you are entitled to call it shoyu.

Anywhere else and you're a tool.

I love your take on Bernie Madoff.