A miracle of birth in the NYTimes today. A shark gives birth to a sharktot and without the help of any males. A shark of the species bonnethead. Rather apt. It's called parthogenesis. As in, this shark has no daddy: 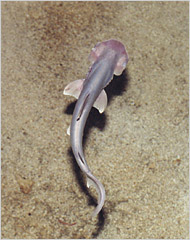 It's not a lesbian thing, but more of a Virgin Mary vibe, in which nature sees fit to let girls have babies without boys. But never has a shark done so before. Sort of like a single mom just producing her own tot minus boyfriend or baster. A single mom with a bonnet. Go chick-sharks! Get yo' bonnet ON! (What the heck am I talking about? I do not know.)

Crabmommy loves me a good silly science story. I have had an abiding interest in silly science for quite a while. For example, I have written about abusive raping dolphins, bizarre moles with star-shaped noses-that-are-also-hands, and caterpillars that can hypnotize ants...but I'm not linking to that one because that magazine, called SEED, is just bursting with editorial foolishness and grammatical feebleness.

There. My first nasty personal moment on C-mommy. In my blogocratic oath, swore I wouldn't, but as you all know, she not only a crabber and shameless self-promoter, but a hypocrite-mommy too! Question of the week: Does that make Crabtot a hypocritter?

Oh my God, I just punned. It has come to this, people. Never read blogs with puns in them. Go away now! I beg you. Stop looking at me! I don't want you to see me like this. REMEMBER ME AS I USED TO BE!

GO! GO! (Or at least, go here, where I have a new and punless post today.)

Posted by Crabmommy at 8:59 AM

I love those kinds of things too. Two headed snakes, the movie "Jurassic Park"....it's all good!

I love the wierd/silly science too. My personal penchant is collosal squid - not the giant squid - collosal.
Primary differences:
Giant Squid
- huge beak
- long tentacles
- agressive
- fight with sperm whales
Collosal Squid
- bigger beak (all the better to eat you with)
- same length as giant squid, but double wide
- long tentacles, with big sharp rotating hooks inside the suckers. Grab and grind.
- fight with sperm whales - and win

I really like your blog. Awesome. I'll be back!
Always,
Crusty~

Colossal squid=colossally exciting, a&a. Grab and grind! Fight and win! I'm off to Google it pronto. I think I read about some Moby Dick-type hunters looking for one in the New Yorker. Or maybe it was McSweeneys. Some crazy-impassioned Australian octo-scientist dude obsessed w/ finding the most colossal colossus squid.

Ha ha, you totally remind me of my 2 and a half year old who, when she's done something shameful, hides behind her hands and wails "Don't look at me! Don't look at me!!" in the most dramatic tone she can muster.

Also, our crazy-impassioned Australian octo-scientist dude died. Us Aussies all miss him very much.

skape: What? When did octo-scientist die? How? At the beak of a colossus? Who is he? Tell us more!