There's a Little Black Dot on the Sun Today

Make that a large-ish gray cloud hovering over the sun. It's the same old thing as yesterday. And I don't dig it. Not even the end of July and already I'm back in cardigans. It's just plain depressing to whip out a cardigan in July in America.

That Crabmommy, wherever she goes, there she does not wish to be. Is it a mindset I can change? Some might say so, but the farthest I am prepared to go down that path is to examine it with the Zen approach, simply recognizing the moment and allowing it to be what it is, free of judgment. Meaning (I think) that I can judge the climate and all and generally feel all Crabpissy at things, but I must not judge myself for judging. For I am but a whirlpool in the river of life. And while I might have a bit of debris in my whirlpool, I must not make a big deal out of the debris. I must just see the debris and (if I am understanding my present material reading correctly), when I see that debris I mustn't try to fling it out of the water or shout at it and judge it and be all harsh on it, but instead I should just acknowledge that there is debris in my whirlpool.

You can say that again.

But before I let my babbling brook become a mighty stream of nonsense, let me get back to why I started this post with Police lyrics: Crabhubby and I went to see the Police reunion concert, for which we were given tickets as a present from my m-i-l. Now there is surely not a human being alive who has not mocked Sting, and certainly I have done so in my time. I have always found his wife to be particularly unsavory, with a face somewhat like a stiletto shoe, and then there was all that Tantric sex business that you really didn't want to visualize with a stiletto shoe....and then that phase of his career where he got choirs of Guatemalan children to sing uplifting backup vocals for him...or whatever it was he got up to (okay, so I don't really know what he got up to but). I picture that whole period of "Sting" to be a series of highly expensive tickets to private benefit concerts held in the same places where Yanni might perform: the Colosseum, atop the Acropolis, a Druid cave...all involving, of course, interesting lighting effects and, quite possibly, some powerful chanting and a very dorkish audience.

That said, I went to the Police reunion concert with low expectations and it was fantastic. In large part this had to do with Sting himself, who performed extremely well and remains annoyingly in shape, although he now looks a bit like Hemingway from the neck up, because he is sporting a very silvery exuberant facial hair situation. But he channeled my teen past right back at me and I briefly thought of getting that poster again, the one I used to have in my room, of Sting eating a piece of fruit, which I used to kiss before I went to bed at night (you laugh, but before Sting came along, I was kissing a poster of Ralph Macchio, so it's all relative).

The very best part of the show, for me, was the Stuart Copeland side of things. I have always thought him amazing, and he drummed his pants off, with a permanently shocked expression on his face. He is very handsome, in an elongated sort of way. He looks a bit like he has had electric shock therapy, or that he might need electric shock therapy, not sure which.

The opening act was Elvis Costello, whom I adore, OBVIOUSLY, but he was ill-suited to the large stadium of aging light-bulb salesmen, grim housewives, tarty younger people with husky voices and French manicures and silver flip-flops, and the generally undistinguished people that comprise a Police concert audience. Seriously, how freaky a Police reunion audience is. It's quite remarkable how unremarkable so many of the fans were in appearance! And many were old. So plum old! Meaning, people the same age as Sting himself only balding and paunchy and in bad shirts because they don't do yoga seven hours a day and then have marathon Tantric bouts with a stiletto shoe, in between performing rock concerts. And there is something both sad and heartening about seeing such people attend a concert, people whom you would swear would never attend a concert and yet there they are, with their kids, enjoying some family entertainment.

And right here I would like to say a word about attending music shows with your offspring: I think it's just wrong. Even and especially if you're a hipster mom or dad (or think you are), you ought not attend pop/rock music concerts with your child. Music is fundamentally about dissing your elders, even if your elders are on-stage playing songs that are 35 years old. I still don't get why there are still so many parents out there who don't get this one timeless truth: when you attempt to be cool with your kids the opposite effect is achieved. And if your kids somehow do think you're cool by going to a show with them? Well then, your kids are supremely uncool. Poor buggers. I saw a number of embarrassed teens at the Police concert, edging away from their dads in pleated pants and moms rocking out in Keds.

To close this post, a thought about age and music. Some musicians age in a yummy sort of way, the musical equivalent of a piece of excellent old Brie. 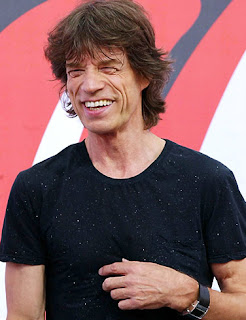 Others refuse to age, but instead tweak their gorgeous selves into something scary and impish by dint of too-young hair and wickedly smooth eyes. 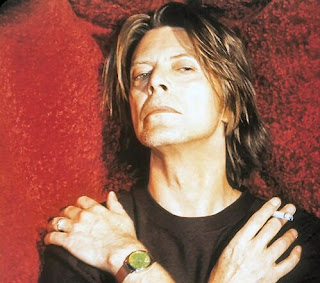 And howzabout those naff criss-crossed arms? What are you doing, David Bowie?

And then there are people who just look, well, sort of not great as they get older, even when they aren't very old, but are simply older. In this category do I find the person whose image is to follow this paragraph. Apparently he is performing again, and I challenge you to find in the following photo, any resemblance to the gayly swarthy crooner whose careless whisper sent far too many people in the 1980s into a tizzy. Seriously, I don't think this could put a boom-boom into my heart, much less leave me hanging on like a yo-yo: 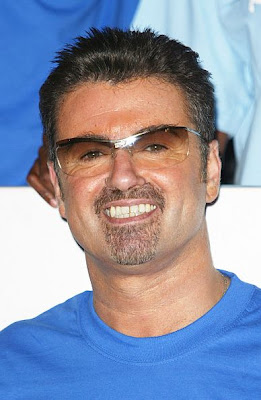 Posted by Crabmommy at 9:51 AM

I also saw the Police reunion concert, a couple of months back in Mannheim Germany, and it was fabulous. And yes, the audience was old. I was quite the youngest person there, you know, by MONTHS.

I enjoyed your stream of consciousness blogging in thsi post, whirlpool and all! Have you read Stings' autobiography? It was fascinating.

Personally, have not been in a large venue since mommy-ness began. Been known to be bossy,and yell at people, as in "Stand up! That's Chaka Khan!"

Caught me a Stones concert quite a few years ago. I think I was aged about 37 at the time, so I lowered the average age to 60.

I nearly wafted out of the stadium on a cloud of dope, though I did spare a thought for the fold-out chairs that were groaning under the weight of paunchy fans.

Re the vaccination thing: As a father of none I have to right to say that people who don't vaccinate their kids shouldbe shot. So I won't, but you sense where I was heading...

Cold and rainy here in sydney, but I don't care, cuz Mrs Blog and I are heading back to Efrica for six months!

Yeah...that photo of George? No.
And Careless Whisper was the first song I slow-danced to. Still love the old GM.

Boys Boarding Schools schools for the boys where they can plan, organize, direct and control the work given by the teachers. This creates the qualities of planning, directing etc which help in their near future. So boys can develop these qualities by doing these creative things.
http://www.teensprivateschools.com/